The waves of life

Tossed her back and forth

And then moving on

Until one day she landed here

Embraced by the mountain

So stable and predictable

But in the crevice she found

Comfort in rolling around

It felt safe to stay there

As the waves washed over her

The mountain and her got

Shaped into something new

A collective shape of comfort.

She rolled deeper as her edges and cracks

Smoothed over and the crevice

It grew deeper and deeper

But where she first found comfort

As she rolled into him

Into an unfamiliar shape

The crevice got so deep that she

Could no longer see the light over the edges

The cracks that should have defined her

And the perfectly smooth and polished shape

Was one she she couldn’t recognise

She ached for skipping across the water

To once again be a part of

The unpredictable roll of the ocean

She wanted to be tossed around and hit sharp edges

Crack open again and see what was inside

Learn about her very center

But time had rolled her out of water’s reach now

And so she waits

For the wanderer that will one day

Catch a glimpse of a smooth rock

To pick it up and send it flying

On the ripples of waves

To the next unknown adventure. 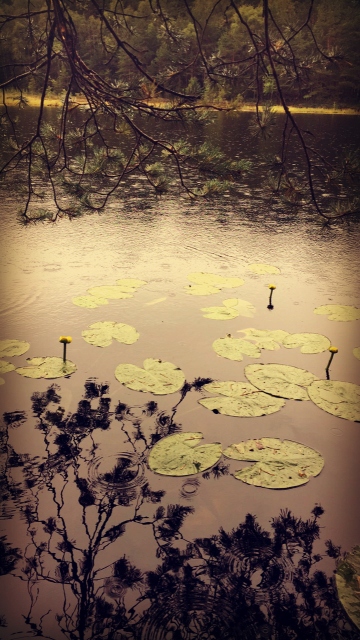 There was a genuine fear

He pushed with one hand

And held tight with the other

Afraid to miss out

Too scared to give in

That no one could give

Where none could be made

She kissed the hand

Opened up his fingers

When he wasn’t looking

All that was left

Was her whispered words

Now you will never know

I listened to Fellside on Audible

Jess Moulson is convicted of murder. But it’s a murder she can’t remember committing. Nothing is quite clear from the drug-fuelled night when a blaze set in Jess’ apartment killed the little boy upstairs. But when the media brands her a child killer, she starts to believe it herself.

Now she’s on her way to Fellside, the biggest, most formidable women’s prison in Europe, standing in the bleak Yorkshire moors.

But Jess won’t be alone in her prison cell. Lurking in the shadows is an unexpected visitor…the ghost of the 10-year-old boy she killed. He says he needs her help – and he won’t take no for an answer.

Back in 2015 I read The Girl with All the Gifts by M.R. Carey and I fell in love with the story and the writing style. So when I heard about Fellside coming out, I knew I had to pick that up as well. And even though I had it on my radar way before it was actually published, it took me way longer to get to it than planned. Better late than never, right?

Going into this novel I wasn’t really sure what to expect. It’s listed as a thriller, but the synopsis mentioned the ghost of a boy, so the appearance of something paranormal was very likely. Just the way I like it!

The writing style of Fellside was every bit as good as The Girl with All the Gifts. It’s a completely different kind of story, but the way that M.R. Carey gives insight into the minds of his characters really makes them come alive. And even though there were quite a lot of characters throughout the story, I never found myself confused as it shifted between them.

One of the things that I thought was brilliant about this story, was the fact that there were no saints here. This is a story set in a prison, and even though you have characters you like and ones that you’ll find outright horrendous, none of them are completely innocent. All the drama and corruption inside the Fellside prison adds another layer of depth to the story.

Jess was a character it took me a while to really feel connected to, but once the reader gets under her skin, she’s quite an interesting character indeed.

I thought the paranormal elements in Fellside were executed very well and made it easy to visualise what was going on. It’s not just a paranormal thriller, there’s  a bit of mystery in there as well!

Fellside held quite a steady pace for most of the story, and after a while it really did escalate. The ending as well was very satisfying and not what I expected.

A really enjoyable read, and I can’t wait to see what M.R. Carey comes up with next!

Do you want to make up your own opinion about the book? Click on the Bookdepository or Amazon logo below to go and get your own copy!

**If you buy via my affiliate links, I get a small commission**

I’ve been curious about livestreaming on YouTube for a while now, and then when I visited a fellow YouTuber here on Saturday we ended up just jumping into it!

Nothing made ready, but was meant just as a trial run. We expected it to last for about 5 minutes and we ended up sitting there for an hour! It was a very interesting and new way to interact, and I look forward to trying it again soon!

If you want to take a peak into the livestream that I did with Leif Nygaard, you can see it here:

Big thank you to Leif for having me on his channel, and I look forward to the next one!