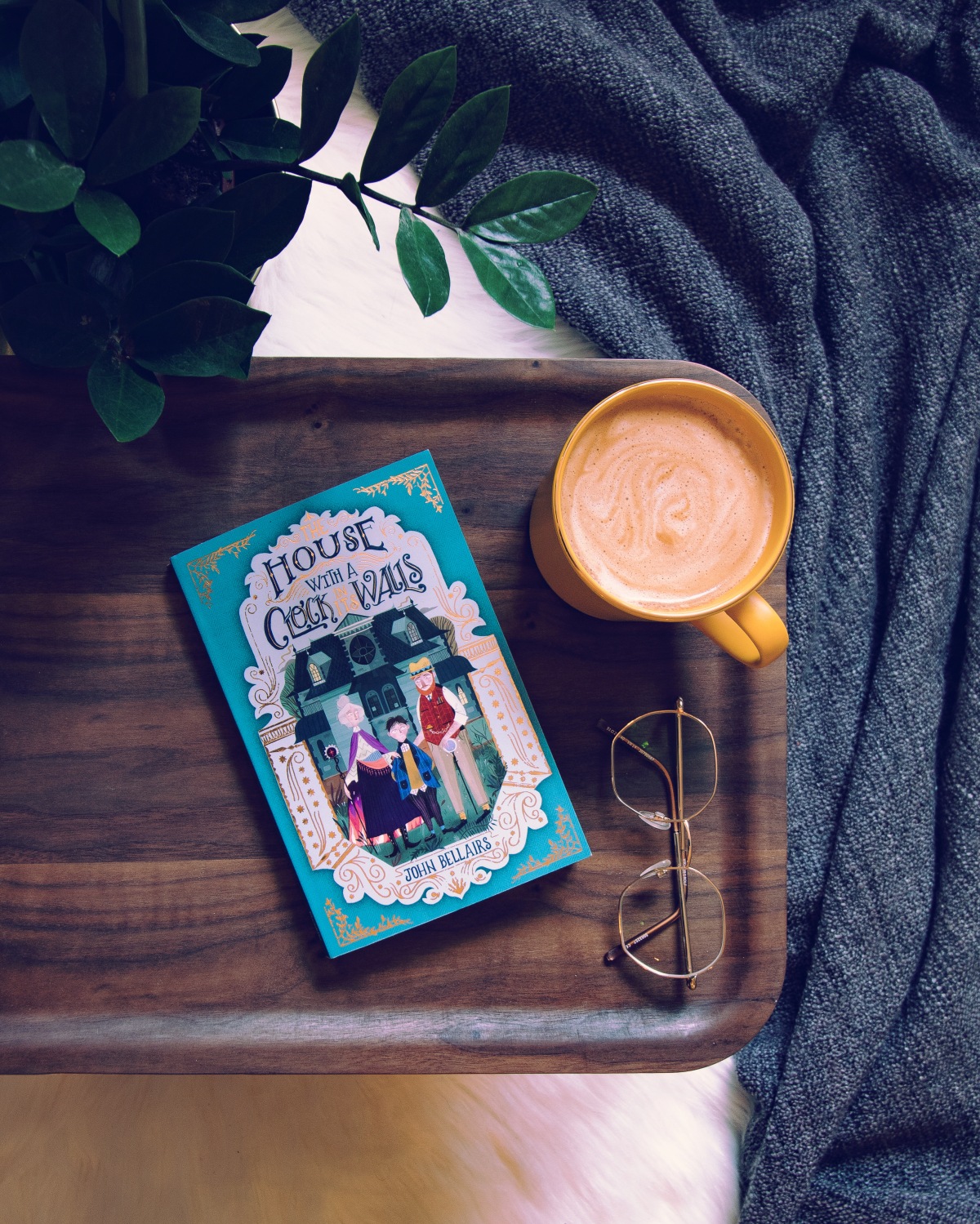 I read a paperback edition of The House With a Clock in Its Walls. This is the first book in the Lewis Barnavelt series.

When orphaned Lewis Barnavelt comes to live with his Uncle Jonathan, he is amazed to find out there is a wizard in his family!

Lewis experiments with Uncle Jonathan’s spells and uncovers the mystery behind the ticking that he can hear throughout the house, sometimes loud, sometimes quiet, sometimes fast, sometimes slow. It’s an evil clock and it could destroy humankind.

I had never heard of this book or the movie adaption of it before the trailer popped up on our Netflix feed. Immediately after having watched it, I thought “This sounds like it must’ve been adapted from a book!”, so I did a bit of a Google search and found the Lewis Barnavelt series where this was the first book.

The movie trailer looked absolutely magical and dark, so just up my alley, and I had to read the book before we watched it. I also have somewhat of a soft spot for Jack Black when it comes to movies because he’s such a wonderful actor and he’s perfect for quirky and mysterious roles in my opinion.

I loved the magic and darkness in this story. It’s one of my favorite things when authors dare to be a bit more on the darker side in their children’s books. I remember loving that as a kid myself.
We get to experience some of the grief that Lewis experiences after having lost his parents, and also the struggle of trying to find your place and to fit in. This book also touches on the subject of bullying and the challenges of finding out who your true friends are.
And the banter between Uncle Jonathan and Mrs. Zimmermann was hilarious!

But even though there were a lot of things in this book that I really liked and enjoyed, there were a few things that I didn’t like as much.
I think one of the biggest drawbacks for me as a reader was the amount of buildup to the big climax, and then having it resolved so quickly. It felt somewhat anticlimactic, and as if a chunk of the story was just left out altogether.
I also felt like I had quite a few questions that went unanswered, but knowing that this is the first book in a twelve book series makes me think that I’ll get more answers further down the line.

But all in all, I did enjoy The House With a Clock in Its Walls, but I did not love it. It’s one of those very rare instances where I actually liked the movie more than the book. That doesn’t happen too often.
Even so, I will continue on with this series, and I will let you know what I think of the other books as well.

It is creepy, dark, quirky, and funny, but I just had a bit higher expectations for it that it failed to meet. But if you have kids who like Goosebumps and other slightly dark and creepy children’s books, then I would recommend giving this book a chance.

My review of Pax by Sara Pennypacker 📚

I read a paperback edition of Pax.

Pax and Peter have been inseparable ever since Peter rescued him as a kit. But one day, the unimaginable happens: Peter’s dad enlists in the military and makes him return the fox to the wild.

At his grandfather’s house, three hundred miles away from home, Peter knows he isn’t where he should be—with Pax. He strikes out on his own despite the encroaching war, spurred by love, loyalty, and grief, to be reunited with his fox.

Meanwhile Pax, steadfastly waiting for his boy, embarks on adventures and discoveries of his own.

I randomly came across Pax while browsing a Norwegian bookstore and it was cover love at first sight! So much so that I decided to buy the book before I even read the synopsis. When I did read the back, I was even more sure that it would be a good match.

I love when authors write stories from the perspective of animals. Giving the animals a voice of their own adds a whole other depth to a story. I find that it’s even more enjoyable when we get to shift between the perspectives of humans and animals so that we get to experience certain events in two (or more) different ways. Pennypacker did a really good job with that throughout this book.

Pax isn’t just a story about a strong bond between a fox and a boy, but it also tells a story of grief and war. As far as I could tell, which war this story is set in isn’t mentioned, but I got the feeling it was probably World War II. Not knowing doesn’t take away from the story at all though since the focus isn’t on the war itself, but more the experiences of growing up during one.

The illustrations throughout this book are absolutely stunning! I wouldn’t have minded if there’d had been more of them, but hey, quality over quantity!
A big round of applause for Jon Klassen!

Both Peter and Pax develops quite a lot as characters during the short amount of time that we get to spend with them, and I loved being able to join them on that journey.

How about the ending?

I loved the way that it ended, even though it might not have been the ending that I was expecting or hoping for. But I thought it was the right way to end the story.

This story also had me crying a little bit, which doesn’t happen all too often these days! So extra points for having me so engaged in the story!

All that being said, I wish it would’ve been a little longer though. I felt like there was more to this story, but I also understand that even though I enjoyed it as an adult, it was written for a much younger audience so having it be 350+ pages long might not have been the right choice for this particular book.

I highly recommend Pax to readers who loved Watership Down, Charlotte’s Web, or any other story of hardship and struggle that are told through the perspectives of animals. It’s written beautifully and it tells a really heartbreaking but also heartwarming story that is just as enjoyable for adults as for kids.