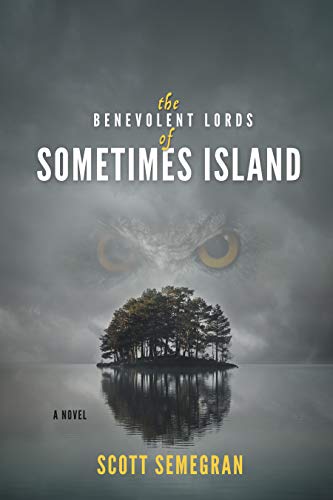 I read a Kindle edition of The Benevolent Lords of Sometimes Island that I received for free from Reedsy Discovery in exchange for an honest review.

The summer of 1986. Central Texas. William and his friends should be having a blast. Instead, they are hounded by the Thousand Oaks Gang and their merciless leader, Bloody Billy. William found Billy’s backpack. And because of what it contains, Billy desperately wants it back, and he’ll do anything to get it. William hatches a plan for his friends to sneak away and hide in an abandoned lake house, except they become stranded on the lake’s desolate island without food or water. Will their time on the island devolve into chaos? Will the friends survive and be rescued?

The Benevolent Lords of Sometimes Island is Lord of the Flies meets The Body by Stephen King, the inspiration for the classic movie Stand By Me.

A gripping suspense story with adventure and danger, tinged with humorous banter between the four friends, the middle schoolers face certain death without adults to protect them from the unrelenting natural elements, as well as the wild creatures that lurk in the wilderness around the lake. With a backpack filled with money and marijuana they stole from the merciless gang leader, it’s only a matter of time before the high schoolers come looking for them, too.

I think I went into this story thinking it would lean more towards the horror side because of the mention of Lord of the Flies and Stephen King, but this story focuses more on friendships, adventure, suspense, and characters.
I think if I had gone into this story with slightly different expectations I think I would have had a very different reading experience. I would’ve probably enjoyed the story even more instead of waiting for something that didn’t happen.
But that is not the author’s fault, that’s entirely on me for making assumptions and reading more into the synopsis than what was probably meant to be there.

That being said, The Benevolent Lords of Sometimes Island is a really well-written novel about an adventure gone wrong. I really enjoyed getting to know the four boys, their friendship, and to tag along on their adventure gone wrong.
The way these boys love and care for each other was what made this story interesting, and you could see how that strong bond and they as characters grew as they went through some tough times together.
It’s also sort of nostalgic to read about friendships during the time before smartphones and internet access everywhere was a thing. It definitely had its pros and cons which we got to witness throughout this story.

I liked Scott Semegran’s writing style. He writes about the boys’ adventures in a way that makes it very easy for the reader to picture it all playing out, without going overboard on the details. I would’ve loved to have gotten to know even more of what was going through the minds of the boys while they were on the island though. But never the less, the challenges and fears they go through there were very well executed and interesting to read about.

All in all, I really enjoyed The Benevolent Lords of Sometimes Island. It’s a story that I wish I had gone more blindly into, but it still ended up being a very entertaining and interesting read. I would love to pick up more of Semegran’s writing in the future.

Lost in eyes, that look

One kiss, all it took.